Maldon Hospital has a long history which goes back to the early gold mining days of Maldon. Gold was first discovered in Maldon in 1853 with a rush that brought over 40,000 miners to the district. The initial gold finds were alluvial which were worked out in the first two or three years. The major gold finds were later discovered when mining went underground in the form of deep reef mining, with mines such as the North British, South German, Alliance, Eaglehawk and many more going to depths of hundreds of metres.

The wealth of the town increased, the name that had been used for the town, Tarrangower, was now changing to Maldon, and Maldon became the eighth largest town in the new state of Victoria. The steady income from these large mines and the more stable population produced the development of more substantial housing and public buildings, and at this time the town it was decided that it should have a hospital of its own and not have to send the ill and injured to Castlemaine.

The early records recall the support of the community for Castlemaine Hospital and the transporting of members of the Maldon community to the hospital.

29 April 1854 from the Argus
“Mount Alexander – from our own correspondent. Inquest on body of John O’Hara of Tarrangower, whose leg was broken by the falling of a tree, felled by his mate, which came down in a different direction to that intended. He was removed into the Castlemaine Country Hospital, where the leg was amputated and he died shortly afterwards.”

21 January 1858 from the Argus
“Accident at Tarrangower – on Wednesday evening a lad named Mark, aged about 15 years, in the employ of Mr McFarlane, dairyman of the Springs, while driving the cows home, slipped down and in falling broke his thigh. Dr Hardy was sent for and set the limb, and on Thursday the poor lad was doing well. He was sent to the Castlemaine hospital, which has lately been of incalculable benefit to Tarrangower.”

Moves for a Maldon Hospital
In 1858 there began a move in Maldon to have Maldon declared a Shire and also to have its own hospital.

During the year 1857, the number of patients admitted from Tarrangower into the Castlemaine hospital was 43 …”

14 June 1858 from the Mount Alexander Mail
“Many people are talking very loudly of the necessity for a hospital at Maldon. But beyond talk nothing has been done. Why do not a few of the leading merchants of the place call a public meeting to take the matter into consideration? There is no doubt that if a few men of influence would take the matter in hand it would be carried out in a proper manner, but those men to whom the public generally look for the imitation of all important measures, are too busy in their counting houses to think of the public wealth.”

8 October 1858 from the Mount Alexander Mail
“Notices of motion, Maldon Council – Mr Lawrence to move that the government be memorialised to place a sum on the estimates for building a hospital at Maldon, conditionally upon the proportionate sum (say one half) being raised by voluntary subscriptions among the inhabitants.”

10 March 1859
A public meeting requested Robert Cleghorn Mackenzie, Warden and Police Magistrate, to convene in five days a gathering to work for the construction of the Maldon Hospital – the request being signed by James Warnock, Thomas Tobin and 25 other citizens.

15 March 1859
The public meeting convened and appointed a committee to collect subscriptions and generally to start up the machinery for the actual creation of the Hospital. This committee comprised Messrs. Mackenzie, Hall, J. W. Wright, Palmer, Thompson, Felix, J. Wright, Warnock and Smith, together with clergy of all denominations and medical men as ex-officio members.

April 29 1859
A public meeting adopted plans for a temporary building. A Hospital Committee was appointed to manage the institution. Towards the end of May tenders were out for the erection of part of the permanent hospital; plans for future management and organisation were drawn up.

19 August 1859
This first hospital was a wooden building thought to have been located in High Street opposite the Tarrangower Hotel and built at a cost of £110. The temporary hospital with accommodation for six patients, was now ready, in working order and open for business.

The wooden building was a temporary structure, not large enough for the expected number of patients, and funds were subsequently raised to erect a more substantial brick building.

24 December 1859
The land that was to be the Hospital Reserve was thought to have been originally purchased by David Hutton, the owner of the Cumberland Inn, High Street, Maldon. He later donated the property for the construction of the Hospital.

25 June 1860
The foundation stone of the permanent brick structure was laid and the building of the first section was begun. Arrangements for the laying of the stone were made by the Southern Cross Lodge – it was not unusual for Freemasons Lodges to officiate at such ceremonies. Members of the Southern Cross and Mackenzie Lodges assembled in full regalia for the occasion. In a cavity of the stone they placed membership scrolls of the Lodges, names of the Hospital Committee, coins and newspapers of the day. Five sovereigns were thoughtfully placed on the stone “for the refreshment of the workmen”.

The architect for the new building was D. R. Drape who also designed the M

arket Building, the Holy Trinity Church and the Beehive Chimney. The concept for the building can be seen in the copy of his original painting of the proposed building. The builders were Messrs. Hornsby and Briscoe, and the first wing, the Men’s Ward, was built for £554/16/-.

31 August 1859
The first patient, Richard Kennedy, was received and treated for rheumatism in Maldon’s Hospital. He was later discharged on 2 October 1859.

31 October 1859
A medical report was presented to the House Committee of the Victorian parliament by W. T. Walmsley. Attached were the signatures of Dr. C. H. Hardy, Dr. Adrian Kupferberg, Messrs. S. J. Thomas, M.R.C.S.L., M. T. Mason, M.R.C.S.L. and R. C Mackenzie. The report mentions that the first death occurred at the Hospital on October 2, and that six patients had been admitted since the institution was opened.

The Hospital was enlarged at this time with the building of a second wing and bathrooms. This was to be the Female ward and was built at a cost of £763/5/-.

April 1867
The Middle building was added at this time. Designed by T F Kibble, it was two story building with face brickwork and the three buildings were enclosed by a verandah being built at a cost thought to be £780/5/- The Hospital was now taking the shape of the Drape original design.

At a later stage the front verandah was removed, plaster pilasters and urns were added to the facade as well as the portico, and the front of the building was plastered.

In later years the front was painted and then restored to its original finish with the paint being removed.

Generous bequests in later years allowed the construction of the MacIntyre, Gray and Oswald wards.

26 November 1994
The modern residential care facility was built in 1994 and named the Jessie Bowe House to honour Colonel Jessie Bowe, a Maldon born nurse, who became the highest ranking woman in the Australian Army during the Second World War.

This is a twelve bedroom facility that provides residents with private room plus ensuite accommodation, dining room and lounge room.

A major renovation and construction project in 2001, costing $3.7 million, returned the Hospital to more like its original appearance and added two new wings, Mountview Home and the George Ray Ward. The renovated original Hospital now houses a medical clinic, an outpatients area, allied health services, the Day Centre, the Board Room and staff facilities.

The George Ray Ward, built with the generous assistance of the Ray family, is the four bed acute care facility with two single-bed rooms and a two-bed room that provides acute medical, convalescence and palliative care.

The newly landscaped indigenous garden at the front of the Hospital, generously donated by Robinson and Narelle Waller, gives a friendly entrance to the reception area. 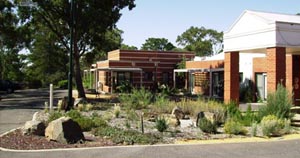 The original Hospital in addition to providing medical services was also a Benevolent Asylum and this second function continued until 1912. In 1865 the Ladies Benevolent Association was formed to relieve the distress of the residents and it is noted that for Christmas Day menu the institution included not only soup, roast beef and plum pudding but also porter. In those days the Committee frequently called for tenders for the supply of wine, beer and brandy – luxuries which do not figure in today’s purchases. In 1879, for instance, the Committee was discussing the desirability of supplying “China tea and loaf sugar” to inmates; and then dealing with tenders received for these items: brandy, ale (“best brands”), port wine and stout. Note that brandy was quoted at 5/3 a bottle and ale (“best brands”) at 13/6 a dozen!

The Hospital held its first Easter Fair on 2 April 1878 and the Fairs was run for many years with the proceeds going to the Hospital. This first Fair was recorded as attracting the greatest gathering so far seen in Maldon and raised £157/13/1, which was divided between the Hospital and the Benevolent Association. Year after year, the Minutes, refer to the Easter Fair and to the work done for it by the Maldon Fire Brigade.

The Hospital even acquired a merry-go-round during the early years for use at the Easter Fair, and in 1889 there is recorded that the Miners’ Association wanted to hire it for a function. The Hospital Committee asked £5 for the hire, £1/10/- for turning, and “10/- for a player”. The miners declared that the price was too high, and obviously felt hurt about it.

The traditional Hospital Sunday gatherings were started some years later and helped substantially to raise funds. Sometimes, it appears, over 1,000 coins were placed in the collection boxes – but there isn’t a record of the denomination of the coins. Similar gatherings were held in Castlemaine, and there was great fashion rivalry between the ladies of Castlemaine and Maldon on these occasions. It became quite a fashionable Sunday event, the Band would march through Maldon streets and a combined choir would sing.

The first Hospital Auxiliary was formed on 17 July 1930 and the office bearers then appointed were: President, Mrs. A. Haybittle; Vice-president, Mrs A. Meyer; Treasurer, Miss E. Dennis. Members present at this first meeting were Mesdames A. G. Williams, R. A. Grigg, T. Bell, R. Rewell, .L Gaynor. Apperly, West, S, Rowe, C. Stewart, N. Neilson, A. Bowe and Misses Calder, Henry and Laidler. At its formation the Auxiliary was said to have helped the Hospital in a range of ways – in the raising, of funds, organisation of functions and in sewing.

The Hospital Auxiliary continued to operate until 2005 when it finally disbanded.

The major building and renovation project for the Hospital in 2000 required the community to raise $100,000 to match the State Government’s share of $3.5 million. The fund raising committee, with Marjory Taylor as President, raised $130,000 in less than nine months due her persuasive powers and to the generosity of the local residents, generous donations, fund-raising functions and several grants from philanthropic organisations.

Doctors who have served the Hospital

The medical staff who have served the Hospital and provided medical care and support are too many to mention. What can be listed are the doctors who have worked at the Hospital:

Amid the doom and gloom and bad publicity about nursing homes, there’s a star that shines brightly in Maldon—Jessie Bowe House.

The staff from top to bottom gives 100% of love and care. They go the extra mile and do everything in their power to make our lives healthy, happy and interesting.

It’s not a glamourous building but it doesn’t matter how luxurious, if the staff isn’t full of lovely, caring fun-loving people.

And we’re lucky enough to live in a home (the staff emphasise that it is our home and we must be comfortable here).